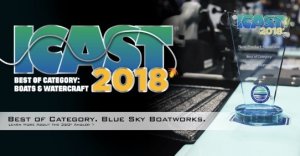 What a year for Blue Sky Boatworks. The new brand of quiet watercraft developed under the auspices of Jackson Kayak completed a record Kickstarter campaign in early spring, and recently in Orlando, the brand’s flagship model, 360° Angler, won Best of Category - Boats & Watercraft at ICAST, the premier fishing trade show in North America.

“We’re thrilled with the recognition,” said Jackson Kayak’s CEO, Eric Jackson. “But we knew we had something special from the moment we envisioned a more stable and versatile platform for anglers.”

Validation of the idea came in March with Blue Sky Boatworks’ Kickstarter capital campaign. When the campaign went live, it blew past its stated goal within a record two hours, finally topping out at over $300,000. The campaign not only helped fund final production, it revealed just how hungry the market was for a different and more versatile craft.

Riding on twin sleek hulls, the 360° Angler blends a bass boat’s stability and room with the stealth, agility and portability of a kayak. It can be pedaled using the patented FlexDrive system, paddled, poled or driven by the E-Drive electric motor coming in November by Blue Sky Boatworks. It can be trailered, car-topped and hauled in the back of most pick-up trucks; integrated wheels make it easy to get from vehicle to water. A fully adjustable Captain’s Seat swivels for a commanding view and all-day, fish-fighting comfort. Deck space and gear tracks handle gear, cooler, extra rods (in-hull storage), a four-legged friend, with room left over to stand and sight cast.

“It is without question the most feature-rich boat in its class,” Jackson said, “with stability and comfort beyond anything else out there. I think ICAST recognized the potential of the 360° Angler to revolutionize the category and draw new anglers to the sport. Which is what our industry needs. All credit goes to the design team.”

About Blue Sky Boatworks: A new brand developed by a team from Jackson Kayak, Blue Sky Boatworks is an entirely new line of quiet watercraft that takes comfort, ease of propulsion and stand-up stability to new levels. Launching in 2018 with two models — the 360° Angler and 360° Escape — these boats ride on sleek twin hulls and feature a patent-pending, full-turning luxury seat, patented Flex Drive pedal-drive system (with lithium ion-powered E-Drive soon available) and a generous platform for full-circle casting from any angle. These super-stable craft offer easy access from the beach or dock, and open a world of possibilities for those who seek more than current kayaks offer. Blue Sky Boatworks are built at Jackson Kayaks’ plant in Sparta, Tennessee.

The 360º Angler
For those who want a boat specifically designed for fishing, the 360°Angler sits comfortably between the bass boat and the kayak without compromising space, comfort, accessories, storage, stealth and the ability to get to those skinny/shallow waters the big boats can't. The Angler has gear tracks for rod mounts, comes with rod holders, has hull storage for rods and tackle boxes and much more.

See the AUP for our Acceptable Use Policy and a Privacy Statement. Verein Playak is responsible for all editorial content on this site (including all graphics). No part of this site may be duplicated in any way without explicit permission from Verein Playak. Verein Playak takes great care to only publish original content, but since part of the content is user generated, we cannot always guarantee this 100%. If you notice any copyright violations, please let the editors know through the contact form and they will take appropriate action immediately. As a news and information platform, we republish small text snippets and thumbnail images, but always link to original content on other sites, and thus aim to adhere to a 'Fair Use' policy. If you believe we violate this policy in any particular case, please contact us directly and we'll take appropriate action immediately.